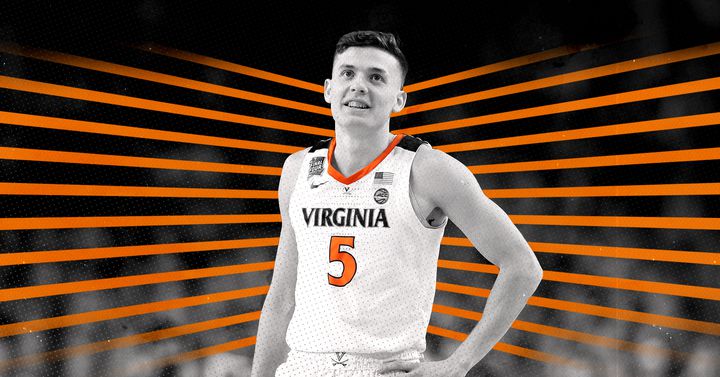 The emotional leader of Virginia basketball is a 6’2 junior guard who has emerged as a March Madness hero for the ‘Hoos. Kyle Guy put UVA in the national championship game by sinking three clutch free throws to beat Auburn at the buzzer in the Final Four. Now he’s trying to help his program win its first men’s basketball title ever.

Guy led Virginia in scoring this year at 15.2 points per game. He’s been at his best on the biggest stages of this tournament, first hitting a flurry of threes to allow the Cavaliers to keep pace with Purdue in the Elite Eight, then coming up in the clutch multiple times in the Final Four against Bruce Pearl’s Tigers.

Tony Bennett is the face of Virginia’s program. Teammate De’Andre Hunter is considered the superior NBA prospect. But if UVA wins the national title, it will be because Guy carried its offense when it mattered most. This is everything you need to know about Virginia’s star guard.

Where is Kyle Guy from?

Guy was born on August 11, 1997. He was raised in Indianapolis, Indiana where he starred for Lawrence Central High School. As a senior, Guy was named Mr. Basketball in the state of Indiana. He set his school’s all-time scoring record by registering more than 1,600 career points.

What was Kyle Guy’s recruiting ranking?

Guy was named a McDonald’s All-American as a senior. His ranking was all over the map. ESPN had him highest as the No. 27 player in the class of 2016. Rivals had him at No. 43 overall and Scout had him at No. 42.

Tom Crean and the Indiana Hoosiers offered Guy a scholarship, but he chose Virginia instead. Guy committed to Virginia at the start of his junior year with standing offers from Purdue, Butler, and Xavier, as well as the Hoosiers. Guy committed shortly after visiting Virginia, saying this at the time:

“I’m just as shocked as anybody,” Guy told ESPN.com. “I just fell in love with Virginia, with [coach] Tony Bennett. They had everything. It’s the perfect package.”

Kyle Guy rocked a man-bun as a freshman

Guy was immediately a productive scorer for Virginia, starting seven games and averaging 7.5 points in 18.6 minutes per night, which translates to 16 points per game over 40 minutes. He was one of the best three-point shooters in the country as a freshman, canning 49.5 percent of his threes.

Still, Guy got most of his attention for his “man-bun” hair style. He cut it off before his sophomore year.

Guy led Virginia to a brilliant season as a sophomore

Virginia was unranked in the preseason polls ahead of the 2017-18 season and picked to finish sixth in the ACC. All UVA did that season was enter the NCAA tournament at 31-2 overall and finish 17-1 in conference play. Guy was the team’s leading scorer at 14.1 points per game. His three-point percentage fell to 39.2 percent as his volume increased, but he was still dangerous from the outside.

As Virginia won the ACC tournament, Guy was named tournament MVP. He was also named first-team All-Conference and third-team All-American.

Guy was devastated by the loss to UMBC

Virginia headed into the NCAA tournament as the No. 1 overall seed in 2018 only to become the first top seed to ever lose to a No. 16 seed. UMBC blew out Virginia by 20 points to make history. Guy struggled with anxiety following the loss:

The first was a letter to himself that he had written just after Virginia secured the No. 1 overall seed, and the second, a follow-up written approximately six weeks later detailing his embarrassment and mental struggles following the upset.

Through the posts, Guy offered a detailed look at the turmoil and anxiety he’d experienced throughout the season while helping lead his team to five consecutive weeks as the country’s No. 1-ranked squad heading into the postseason, as well as ACC regular-season and conference tournament titles.

For more, read ‘A chance to breathe’ — our story on how Guy dealt with anxiety following the biggest upset in college basketball history.

Kyle Guy has been great again as a junior

Guy has been super clutch in the NCAA tournament

Guy struggled through the first three rounds of the NCAA tournament, scoring just 22 points combined through wins over Gardner-Webb, Oklahoma, and Oregon. Guy responded in a major way against Purdue, catching fire in the second half to help carry UVA to the win:

Guy was then the hero against Auburn in the Final Four, hitting a dagger three with nine seconds left to trim the deficit and then drawing a foul and hitting all three free throws to give Virginia a shocking one-point victory:

Kyle Guy is engaged to his girlfriend Alexa Jenkins

Guy and Jenkins started dating in eighth grade. The couple got engaged in Feb. of 2018:

We ranked Guy as the eighth best NBA prospect in the Final Four. He is not considered a top-100 NBA draft prospect on ESPN’s big board.