TEMPE, Ariz. — It doesn’t matter where Josh Rosen plays next season — he’s going to have to learn a new offense.

But should Rosen remain the Arizona Cardinals‘ starting quarterback, he’ll be running the Air Raid under new coach Kliff Kingsbury. And those who know the offense and know Rosen believe the second-year quarterback can fit Kingsbury’s scheme just about as well as any other quarterback.

“At the end of the day, the Air Raid’s about kind of cutting the field in half, and pushing the ball downfield,” said ESPN analyst Dan Orlovsky, a former NFL quarterback. “That’s a big part of it. So, intellectually, Rosen’s a perfect fit.

Tuesday marks the second day of Phase 1 of the Cardinals’ offseason program. It’s also the second day that coaches can start teaching Kingsbury’s scheme in the classroom.

The fundamental tenants of the Air Raid won’t be new to Rosen.

Physically, Rosen fits the mold of a Kingsbury quarterback more than Kyler Murray, the Oklahoma quarterback who’s widely considered a lock to be the Cardinals’ pick at No. 1 in this month’s NFL draft. Of the seven quarterbacks who played primarily for Kingsbury in his six seasons at Texas Tech, only one was shorter than 6-foot-3 — Baker Mayfield. And Mayfield split time as a freshman in 2013 with 6-foot-5 Davis Webb before transferring to Oklahoma. But it’s not just Kingsbury who preferred bigger quarterbacks in the Air Raid. During his eight seasons at Texas Tech, where he made the Air Raid a household scheme, Mike Leach’s quarterbacks were 6-1, 6-2, 6-3 and 6-4. The 6-3 quarterback was Kingsbury.

“I was pretty athletic back in my day,” Kingsbury said. “I was a pocket passer. Josh can move. He can extend plays more than people think. He has a great tennis background, very athletic and you don’t have to be a 4.3 guy [in the 40-yard dash]. You just have to be able to move off the spot, keep your eyes downfield and extend the play enough for those guys to uncover, and when you watch the tape, he does a good job of that.”

Kingsbury later added: “He is a much, much better player than I was.”

But, Kingsbury said, there’s no certain size that fits the Air Raid.

“It’s our job — whoever the coordinator is, the coach is — to build around that guy and make sure you’re doing stuff that he can do,” Kingsbury said. “If he can run it, [then] do things he’s good at running the football. If he’s only a dropback passer, you better have concepts to get the ball out of his hand, [that] he knows where his reads are and [can] make quick decisions. The Air Raid, it has that, I guess, give-and-take in it, where you can make adjustments to it and be effective with different styles of play at that position.”

Kyler Murray is widely considered a lock to be the Cardinals’ top pick in the NFL draft and the man to run the Air Raid, but experts say Josh Rosen, above, fits the mold, too. Chuck Cook/USA TODAY Sports

Orlovsky, however, believes having a quarterback who can “move around easier” will be beneficial in the Air Raid because of how the scheme is spread out even more than traditional pro-style sets. Typically, Air Raid offenses use only one tight end and five offensive linemen, putting more pressure on the quarterback to escape pressure on his own — which is where a more mobile, dual-threat quarterback could flourish in the Air Raid.

And at Texas Tech, Kingsbury didn’t set his quarterback under center often.

Last season, 93.6 percent of Texas Tech’s dropbacks were out of the shotgun, according to ESPN Stats & Information. While Kingsbury likely will adjust and tailor his offense to the speed and athleticism of NFL defenses, it’s expected that whoever his quarterback is will line up in the shotgun more often than not.

Kingsbury has never seen the disadvantage of running an offense out of the shotgun, and he doesn’t think putting a quarterback primarily in shotgun will diminish the run game.

If anything, Kingsbury said lining up in shotgun will help the quarterback see a “clearer picture sooner.”

And that could be a benefit for Rosen.

Chad Johnson, Rosen’s high school offensive coordinator at St. John Bosco in Southern California, said Rosen would flourish in a system that stressed pre-snap decisions, like the Air Raid. The more Rosen could eliminate the wrong play, make a check, understand ball distribution or decipher defenders’ leverage while utilizing his shoulder turn, his pump fake and his eyes, the better Rosen could be in the Air Raid. 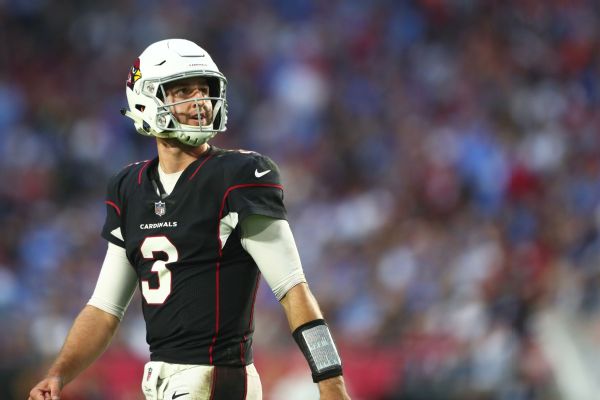 What can the Cardinals get for Josh Rosen? Depends whom you ask. Story

“Where Josh would be at his best is if you give him a menu and Josh was able to get from one play to the next because of a look,” Johnson said.

On top of having the size and smarts to run the Air Raid, Rosen also has the skills, said Bowen, who believes Rosen has already proved he can put a ball wherever he wants it.

“What Kliff Kingsbury is going to do is try to manipulate defenders and give his quarterback high-percentage throws in quick progressions,” Bowen said. “And that’s going to make Josh Rosen play with faster eyes, get the ball out quicker, which he’s shown on his college tape, and even last year, through those ups and downs, he showed on his pro tape he can get the ball out.

Whether Rosen will get a chance to play in Kingsbury’s Air Raid offense is still yet to be seen.

For now, though, he’ll begin to learn it. And when Kingsbury is allowed to start working with the quarterbacks, if Rosen is still one of them, Leach believes Kingsbury can have a significant effect on the former UCLA star.

“I think he’ll elevate his level of play,” Leach said. “I think he’ll make him a more focused player. And he has the opportunity to make him, hopefully, select the plays that are the best plays and teach him those plays because for too long he’s been in the offense-of-the-day type of deal, you know what I mean? More like an offense of the week. And I think just settling on a specific offense will help him.”