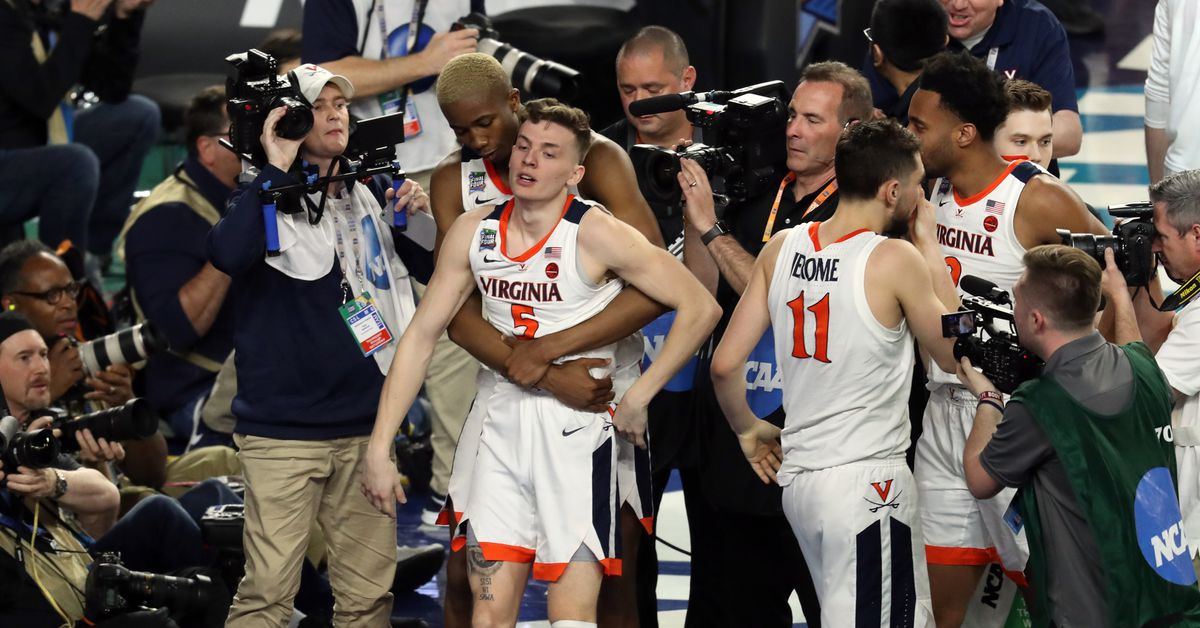 Every Virginia fan and every Auburn fan will remember Saturday night in Minneapolis for the rest of their lives.

Here are the three things you need to know about how Virginia’s 63-62 triumph over Auburn went down.

1. A finish neither side will ever forget

If there was any doubt still lingering after Virginia’s South regional final win over Purdue last weekend, there isn’t anymore: The days of the Cavaliers being seemingly unable to catch a break in the NCAA tournament are dead forever.

Trailing by two with just 1.5 seconds to play, Virginia’s hopes of going from ultimate March misery to ultimate March magic in 12 months appeared to be over as Kyle Guy’s attempt at a game-winning corner three found nothing but iron. A whistle on Auburn’s Samir Doughty that will be at the center of much of the Final Four discussion for the next 48 hours changed all that.

In a game where Virginia was an uncharacteristically dismal 6-of-12 from the free-throw line, Guy calmly sank all three freebies. The Tigers attempt at a counter-miracle fell short, and the Cavaliers escaped with a “what in the hell just happened?” victory for the second time in as many games.

One Auburn student poured beer all over his head in the celebration, not realizing a foul had been called. Tough scene for that guy

UVA may have exorcised many of the demons of tournaments past over the preceding two weeks, but Saturday night felt like a direct addressing of the final one. Two seasons ago in the Elite Eight, the Cavaliers blew a 16-point second half advantage against 11th-seeded Syracuse. They allowed the Orange to end the game on a 25-4 run and pull off a 68-62 stunner.

Saturday’s national semifinal appeared to be on the same course. Virginia led 57-47 with just 5:03 to play, and then promptly allowed Auburn to go on what appeared to be a game-defining run. Instead, six points from Kyle Guy in under nine seconds will be talked about in Charlottesville from now until eternity.

Auburn arrived in Minneapolis as the hottest outside shooting team still standing. The Tigers won the Midwest Region thanks to 12 three-pointers against New Mexico State, 13 against Kansas, 17 against North Carolina and a paltry seven against Kentucky.

Against a Virginia team that thrives on taking away Auburn’s two biggest strengths — points in transition and outside shooting — the Tigers struggled on offense for most of the evening. They shot just 9-of-31 from beyond the arc, and a tournament-low 38.2 percent from the field overall.

When Auburn countered UVA’s lethal perimeter defense by trying to attack the basket, De’Andre Hunter and company were there to welcome them.

The 62 points the Tigers finished with were their fewest since an 80-53 loss to Kentucky all the way back on Feb. 23. That defeat had also been their most recent before Saturday night.

3. The Resurgence of De’Andre Hunter

There’s no debating who Virginia’s most naturally gifted player is. De’Andre Hunter is a 6’7, do-it-all forward who can score from just any spot on the court. There’s a reason he’s almost universally projected to be a top 10 pick in this summer’s NBA Draft.

If you’d just looked at Virginia’s box scores from its first four NCAA tournament games, you never would have known this.

During South regional play, Hunter posted modest averages of 10.3 points and 4.0 rebounds per game. He misfired on 20 of the 32 field goals he attempted, went just 3-of-12 from beyond the arc, and managed just only assists and two steals in four games.

With just four points in the first half and his team trailing by three at the break, Hunter came out of the locker room like a man who had just remembered he was supposed to be the best player on the floor. His newfound aggression resulted in scoring eight of his team’s first 13 points, turning a 31-28 deficit into a 40-36 lead in just over six minutes. Virginia would never relinquish the lead.

Hunter finished the game with 14 points, 10 of those coming in the second half. His resurgence was huge when it comes to getting Virginia to the championship game, but it might be even more important when it comes to the Cavaliers’ chances of actually winning their first national title.

Ty Jerome had the best overall game of any Virginia player (21 points, nine rebounds, six assists), and Kyle Guy scored the game’s most important points, but the Cavaliers almost certainly are headed home if not for a long-awaited bounce-back game from Hunter.