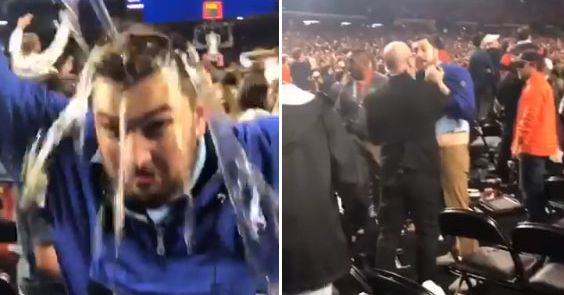 The end of Auburn vs. Virginia was particularly difficult for this fan.

The man thought Auburn had won and commenced celebrating — pouring his expensive arena beer over his head and screaming “Let’s f***ing go baby!” Little did he know (like a lot of Auburn fans) about the controversial foul call that sent Virginia to the stripe and into the men’s national championship game.

The fan, incensed by what happened began causing a scene.

For those asking: He was belligerent and kicking chairs over after Auburn lost.

Leading to an arrest moments later. This has to be the most impressive quick-switch from absolute joy to devastation we’ve seen in a while.