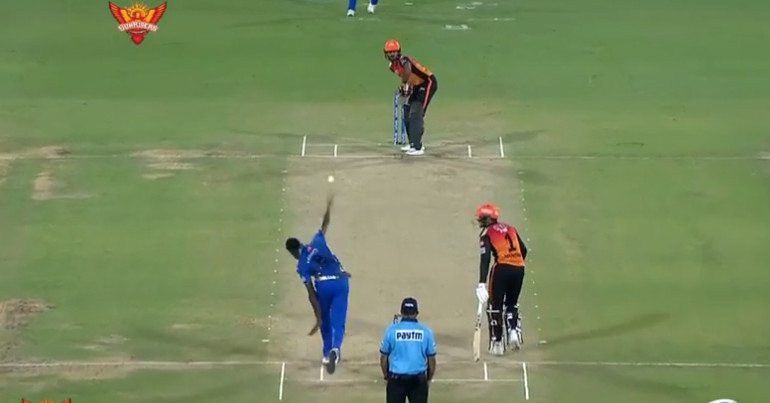 22-year-old Alzarri Joseph shocked the cricketing world over the weekend when he set an Indian Premier League (IPL) bowling record in his very first game, finishing with an astounding 6/12 in just 3.4 overs.

Joseph, who got the nod for the Mumbai Indians, didn’t waste any time in obliterating the Sunrisers Hyderabad order, which included some of the most famous and decorated cricketers in the world.

I don’t know what this means. Please explain it to me.

A team has one opportunity to bat in an IPL game, and that consists of 10 batters. Joseph got out six of Hyderabad’s batters, and gave up just 12 runs — and did all this in 22 balls.

It’s difficult to directly compare cricket and baseball, but think of a wicket like two strike outs and every 6 runs to be like a hit. Joseph essentially finished with 12 Ks, giving up roughly two hits in the process. And even that is an imperfect comparison. Perhaps it’s closer to saying that he pitched a perfect game on his debut.

This season Sunrisers Hyderabad (currently second in the IPL) had averaged 185.25 runs per game, until they ran into Joseph and the Indians — where they scored just 96 runs before being out. Joseph didn’t just destroy a team, he destroyed one of the best teams in the league, full of some of the best players in the world.

The point is that Joseph didn’t just get players out, he got out household name, international players in the process. Being selected to a national team is the equivalent of an All Star, but consider for a second that being on the Indian national team means you’re among the best players of an estimated 66 MILLION people regularly playing cricket in India.

When it was all done he was humble in his destruction.