Below are the important dates, locations, times and TV channels for the entire 2019 NCAA Tournament schedule: Everything you need to know to tune in to college basketball’s Big Dance, which runs March 19-April 8.

Sporting News will keep you updated with scores and schedules throughout the entire tournament, from the First Four to the national championship game.

That said, here’s everything you need to know to tune in to the latest edition of March Madness:

The NCAA Tournament will be broadcast across several stations, including truTV, CBS, TNT and TBS. TruTV will broadcast the First Four (March 19-20). CBS, truTV, TNT and TBS will all broadcast portions of the first- and second-round games from March 21-24. From there, the Sweet 16 and Elite Eight (March 28-31) will be covered exclusively by CBS and TBS. CBS hold broadcast rights for the Final Four (April 6) and national championship game (April 8).

MORE: How to watch, stream every NCAA Tournament game online

The primary outlet for live-streaming 2019 NCAA Tournament games is March Madness Live, the NCAA’s digital platform available on desktop and by downloading the mobile app. You can also stream games live by signing up for fuboTV, which offers a free seven-day trial.

You can get an updated, printable NCAA Tournament bracket here to fill out before the tournament begins. Sporting News will continue to update the bracket as games are played. 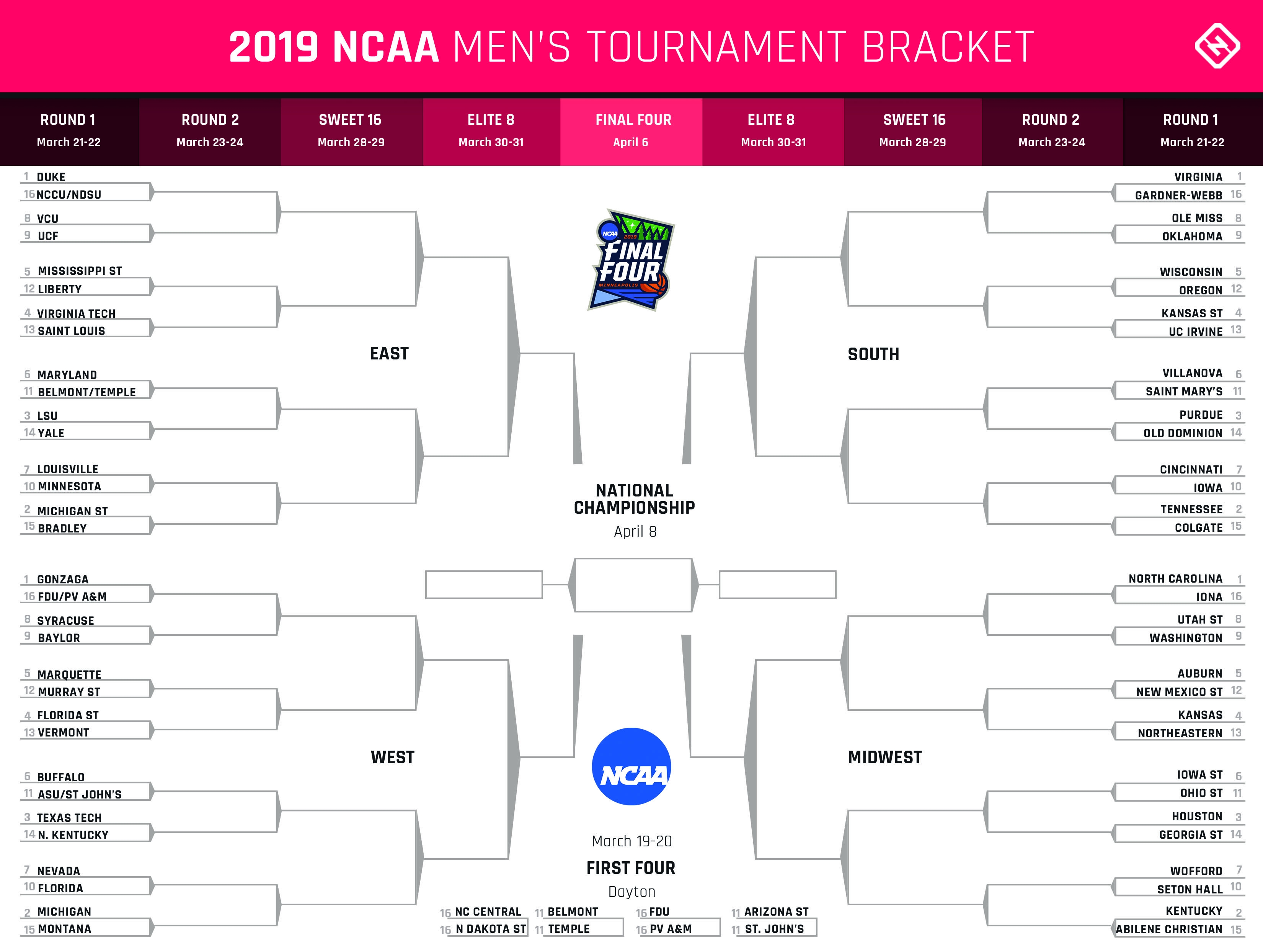 “40 Minutes of Hell” to Hog Heaven: Nolan Richardson’s 1993-94 Arkansas team will go down as one of the most fun SEC title-winning teams of all time. It was something he built, one minute at a time.

How to stop Zion Williamson: Opposing coaches dish on their strategies to deal with Duke’s freshman phenom and, with some luck, beat the Blue Devils.

A barrier-breaking title: The 1961-62 Cincinnati Bearcats made history when they started four black players in their NCAA title game win over Ohio State. We remember the importance of that groundbreaking win.

An Oral History of Steph Curry’s 2008 Breakout: In 2008, a little-known, baby-faced guard from Davidson completely took over the NCAA Tournament.

The Fagan Jinx: They’re not just upset “alerts” when Sporting News’ Ryan Fagan is in attendance. Recapping the many improbable upsets Fagan has been on hand to witness.

More than a timeout: The 1993 NCAA Tournament is more than Chris Webber’s ill-fated timeout in the national championship game against UNC.

Chalmers’ shot still resonates: Mario Chalmers never gets tired talking about his 3-pointer against Memphis in 2008.

DeCourcy’s best of 30 years: Sporting News’ Mike DeCourcy ranks the best games he has witnessed from 30 years’ worth of NCAA Tournament coverage.

The thrill of victory…: Sporting News staff recall their favorite memories of the NCAA Tournament.

…And the agony of defeat: Sporting News staff recalls their most heartbreaking memories from the NCAA Tournament. Get your tissues ready.