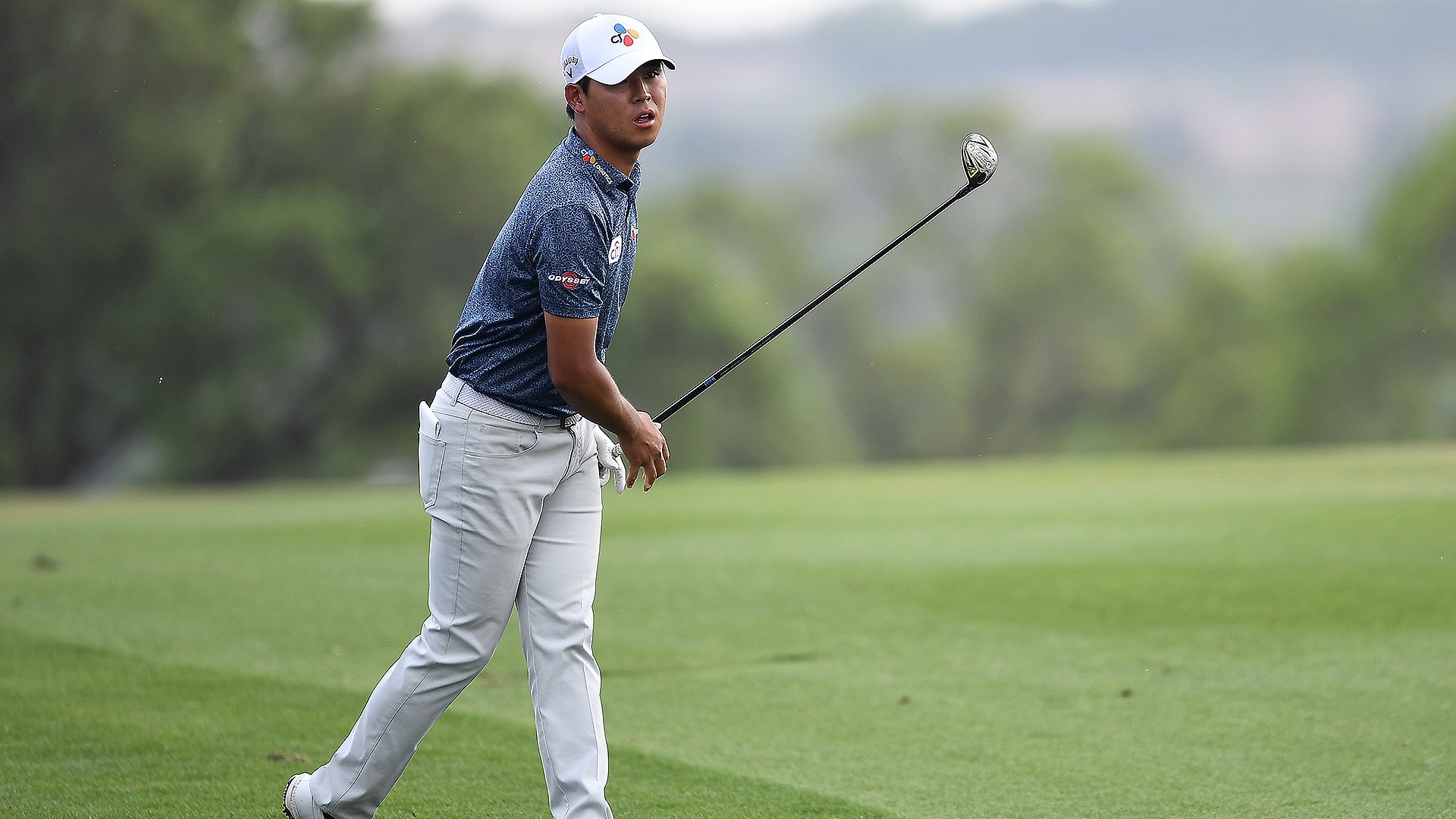 SAN ANTONIO – Si Woo Kim narrowly missed a second hole-in-one on consecutive days and saw his four-shot lead trimmed to one over Monday qualifier Corey Conners after Saturday’s third round of the Valero Texas Open.

Kim aced the 16th hole at the TPC San Antonio on Friday, and he missed it by inches on the way to a third round 3-under 69. He was at 15 under, and Connors, trying to become the first Monday qualifier to win on the PGA Tour since 2010, was a stroke back after shooting a 6-under 66.

Si Woo Kim had a hole-in-one on the 16th hole Friday.

On Saturday, he nearly did it again. ? pic.twitter.com/vwmgi3xc8I

Charley Hoffman, the 2016 Texas Open winner, moved up the leaderboard with a birdie-birdie-eagle finish and the week’s best round of 64. He was two back of Kim at 13 under.

Scott Brown turned in a second straight 67, and Jhonattan Vegas also shot 67. Both were at 11 under with Kyoung-Hoon Lee (69) and four strokes back.

Rickie Fowler and Jordan Spieth started the day tied for second, four shots back. Both finished eight shots out of the lead after ballooning to rounds of 1-over 73.

Kim flirted with the 16th hole on the second bounce on Saturday. This time, the ball rolled past the hole to inside 4 feet for what looked like an easy birdie. He missed, Conners made his from inches shorter and they shared the lead again.

But Conners returned the favor on the next hole, missing a birdie from inside 7 feet.

Kim, winner of The Players Championship in 2017, got out of a greenside bunker at the par-5 18th and sank a 4-foot par to get the one-stroke advantage.

Conners is trying to become the first Monday qualifier to win on the PGA Tour since Arjun Atwal nine years ago. Before that, no one had done it in 24 years.

He birdied the opening three holes, including a near-ace at the third, and almost had a fourth to start the day when his 58-foot putt rested a couple of inches from the cup on No. 4.

He birdied again at the fifth, which gave him a share of the lead with Kim, and joined Kim in birdieing the seventh.

Conners, 27, was a finalist in the 2014 U.S. Amateur, but he has not won on the PGA Tour or any of its affiliate tours. This season he has finished second in the Sanderson Farms Championship and, after Monday qualifying, was third at the Sony Open.

Hoffman’s hot finish came with a birdie at the 14th. He wrapped it up with a 22-foot birdie putt at No. 16 and a 15-footer at No. 17 before he reached the green in two at the downwind 607-yard finishing hole.

Fowler bogeyed his first two holes, part of five on the day. Even with an eagle on the 18th, Fowler dropped 14 spots to 16th and 7 under.

Spieth was in the last group of the day with leaders Kim and Conners, but he quickly joined Fowler in going the other way. He didn’t hit a fairway until the 11th hole and by that time had two double bogeys.

After his front-nine 42, Spieth’s first birdie came on the 12th. He added four more on the backside.