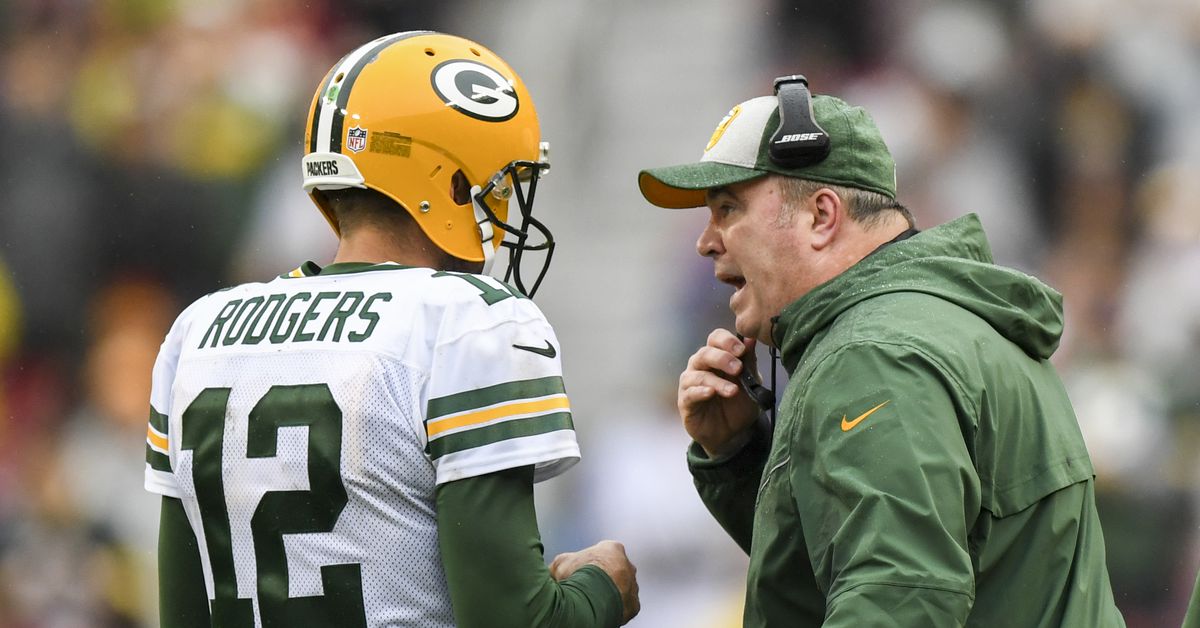 Aaron Rodgers is so far off-base on this one, I don’t even know where to start. In Tyler Dunne’s deep look inside the Packers organization, one thing he dives into is the initial source of friction between their future Hall of Fame quarterback and longtime coach Mike McCarthy. And let me tell ya, I am utterly mystified by Rodgers’ cluelessness.

I don’t even have any unreasonable biases against him. I acknowledge he’s got as much natural jaw-dropping talent as any quarterback, or maybe athlete, ever; that he regularly fires 40-yard off-balance missiles across his body off his back foot while being clobbered by three D-linemen while doing so with the immaculate precision of a Walt White train heist. He’s even told a wonderful story about my all-time favorite athlete — the unspeakably remarkable Justin Smith — bringing the goofs during a post-Thanksgiving Niners-Packers clash.

But, according to the Bleacher Report article, Rodgers’ resentment toward McCarthy all began due to the San Francisco 49ers picking Alex Smith over him with the top overall pick in the 2005 NFL Draft, which is so dumb it makes my head spin. McCarthy was heading into his first season with the 49ers … as their offensive coordinator. And apparently Rodgers thinks McCarthy had some sort of significant impact on that selection. That is an absurd notion.

To put the power structure of the ’05 Niners simply, it was like so: they had a personnel czar, Scot McCloughan, and a head coach who also had final say on personnel, Mike Nolan. The deliberations and evaluations of those two men, but especially Nolan, led to that selection. Not that McCarthy never perhaps gave his two cents, but to in any way intimate or believe that a coordinator could have an outsize impact on how an asset like a No. 1 overall pick is used shows a stunning lack of awareness as to how the internal politics of the NFL work.

Does Rodgers think within his own organization that the thoughts of the offensive coordinator carry significant weight in how Green Bay uses its first-round pick (let alone a first overall pick)? For his organization, there are really only two people that matter for such a pick: GM Brian Gutekunst and head coach Matt LaFleur.

Even other personnel folks and regional scouts, while surely opining, may not have much of an impact on the very early stages of the draft. The efforts of those people are generally manifested more so by their reports on, say, a how a tight end from Appalachian State they’re thinking about drafting in the fifth round executes a wham block on a 3-technique. But even if they do, you know who sure as hell ain’t calling the shots in the war room? Nathaniel Hackett.

Besides, for all anyone knows, McCarthy might’ve actually stood on the table behind closed doors shouting to the heavens for San Francisco to pick Rodgers only to have those pleas fall on deaf ears. And former Packers running back Ryan Grant suggesting “Aaron was upset that Mike passed on him — that McCarthy actually verbally said that Alex Smith was the better quarterback” is so delicious I wish I could frame that quote.

First of all, again, it wasn’t McCarthy who passed on Rodgers. Second of all, what the hell is McCarthy supposed to say? “Uhh, yeah, I know we just took Alex Smith first overall, but my stupid bosses should’ve taken Aaron.” Of course he’s gonna shower the guy they just took to become the face of their franchise with compliments, regardless of whether said pick were the backup long snapper from Southwestern North Dakota State A&M. Just stunning, stunning, stunning obliviousness to the basic realities of coachspeak 101.

If he wants to hold a grudge toward the 49ers organization for not picking him, great. Pro athletes often use chips on their shoulder to fuel them. But then that grudge should’ve been directed toward McCloughan and especially Nolan, both for ultimately having the trigger finger, and in thinking Rodgers was too arrogant and cocky.

If Rodgers grew tired of McCarthy, great. There are plenty of perfectly valid reasons for doing so, such as when McCarthy tucked his tail between his legs and kicked field goals from the 1-inch line to cap back-to-back drives in the 2014 NFC Championship Game in Seattle, where his cowardly coaching throughout gifted the Seahawks a trip to Super Bowl 49. That one’s permanently seared into my brain, and there’s no shortage of other examples.

But things got off on the wrong foot from the very start for the most wildly irrational reason that lacked a shred of logic or clear thinking.