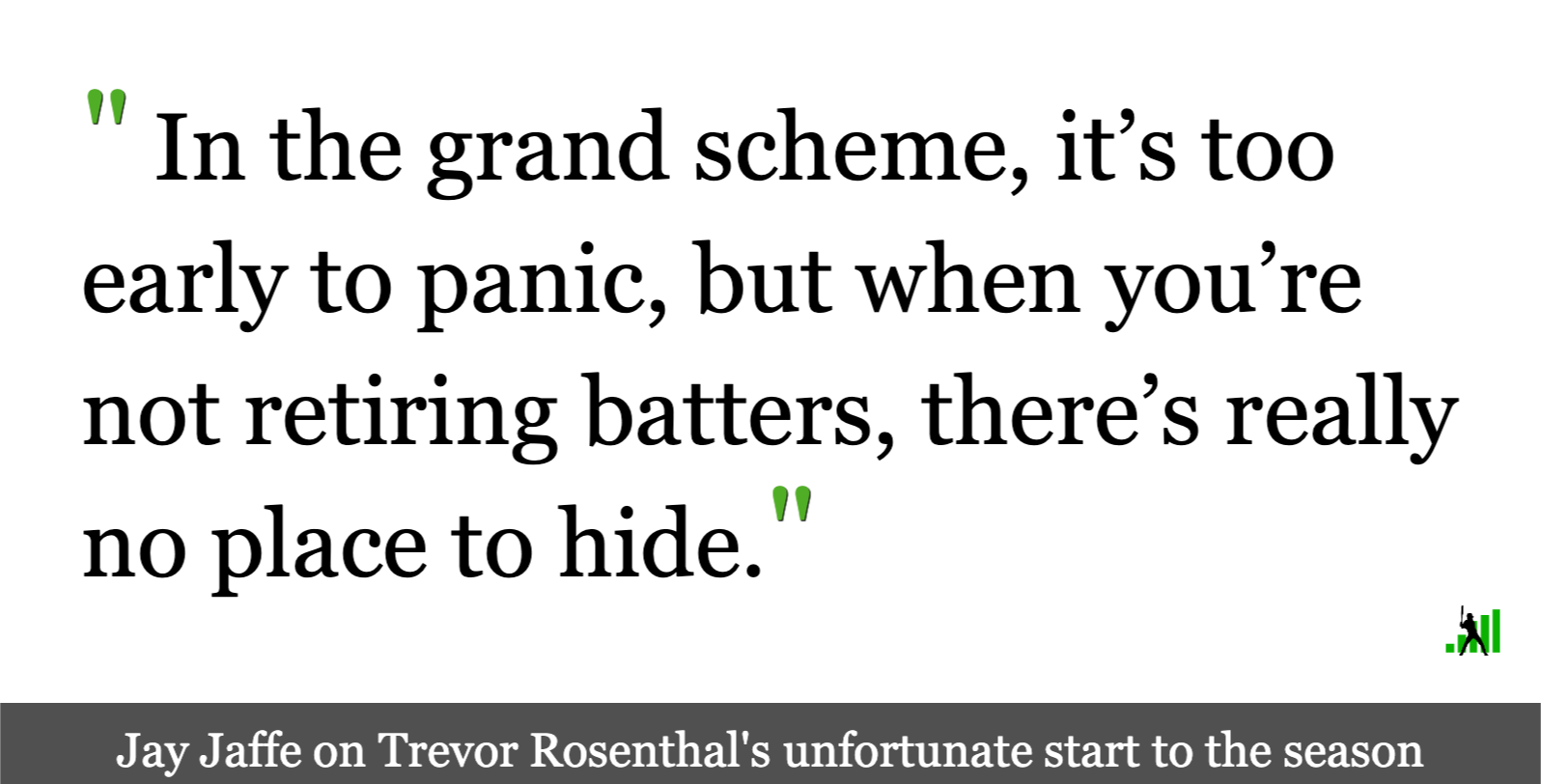 Last month, in the wake of Bryce Harper’s signing with the Phillies, I took stock of the Nationals and raised an eyebrow at the limited fixes administered to a bullpen that has required annual midseason makeovers, and that last year tied for 25th in the majors in WAR (0.6). General manager Mike Rizzo’s big offseason moves regarding the unit were to sign Trevor Rosenthal, who missed all of 2018 due to Tommy John surgery, and Kyle Barraclough, who pitched to a 4.20 ERA and 4.98 FIP with the Marlins. So far, it hasn’t gone well, to say the least. The unit as a whole has an 11.02 ERA through five games.

Barraclough has only been charged with one run allowed in 3.1 innings, but he’s also allowed five out of five inherited runners to score. That’s no good, but it’s nothing compared to the travails of Rosenthal, a 28-year-old righty who, during his Cardinals tenure, pitched to a 2.99 ERA and 2.60 FIP while saving 121 games from 2012-17.

On March 30 against the Mets, Rosenthal entered a tied game in the eighth inning and proceeded to allow back-to-back singles to Wilson Ramos and Jeff McNeil, then walked Amed Rosario (a tough thing to do given the kid’s 4.9% walk rate last year) and served up a two-run single to J.D. Davis. Manager Davey Martinez gave him the hook in favor of Barraclough, who immediately balked in a run, and two outs later, allowed a two-run double by Pete Alonso. Thus, four runs were charged to Rosenthal, who didn’t retire a batter.

Undeterred, Martinez called on Rosenthal again the next day with the Nationals trailing the Mets 5-2 and runners on the corners courtesy of mid-March signing Tony Sipp. Facing Rosario again, Rosenthal threw just one pitch, which the 23-year-old shortstop lined for an RBI single. Sean Doolittle relieved Rosenthal and allowed back-to-back singles, the second of which scored Rosario. Another day, another outing with a run allowed but no out for Rosenthal.

He didn’t get the call again until Wednesday afternoon against the Phillies. Relieving Sipp with one out and a man on first base in the eighth inning of a game that the Nationals led 6-4, Rosenthal threw a total of 12 pitches and somehow issued walks to Maikel Franco (6.2% walk rate in 2018) and Scott Kingery (5.0%). That loaded the bases and brought on Barraclough, who served up a bases-clearing double to Andrew McCutchen and then an RBI single to Jean Segura. Two of those runs were charged to Rosenthal, who again didn’t retire a batter. Fortunately for him, Washington rebounded from the 8-6 deficit to win 9-8 on a walk-off walk by Jake Noll against Phillies reliever David Robertson.

The grim tally for Rosenthal: seven batters faced, four hits allowed, three walks allowed, seven runs allowed, an .801 wOBA against, an ERA of infinity, and — according to the Baseball-Reference Play Index — a couple of unenviable records, or shares of them.

First, Rosenthal has tied the record (or the record going back to 1908, as far as the Play Index covers) for the most consecutive appearances without retiring a batter to start the season. The only other pitcher to fail to retire a hitter in his first three appearances was Rich Hill in 2014, during the lefty’s wilderness years. Purchased from the Red Sox, for whom he had been toiling at Triple-A Pawtucket, Hill made two appearances for the Angels during a July 1 doubleheader, walking three hitters and allowing one hit; eight days later, he drew his release, and a week after that he signed with the Yankees, who called him up in early August and summoned him into an August 5 game during which he walked the only bater he faced. Thankfully, he resumed retiring batters in his next appearance three days later. He made a total of 14 appearances totaling 5.1 innings for the Yankees; the next year, his four-start September comeback with the Red Sox began the resurrection of his career as a rotation regular.

Second, Rosenthal now holds the record for most consecutive outings allowing runs without retiring a batter with four, including his August 16, 2017 appearance with the Cardinals, during which he served up a solo homer to Xander Bogaerts and a walk to Mitch Moreland before departing due to an elbow injury.

A week after that appearance, the news that Rosenthal would need Tommy John surgery was announced, and in November he was unconditionally released. Including that last pre-surgery outing, he’s allowed nine runs in this gruesome stretch.

Rosenthal still has a chance to avoid one more record, that of the most consecutive appearances without retiring a single hitter. Two pitchers, one Cardinal and one National, share the record with five:

Most Consecutive Appearances Without Retiring a Batter Since 1908

The good news for Rosenthal is that his velocity is more or less back to pre-surgery form; according to Pitch Info, he’s averaging 98.5 mph on his four-seamer, not far from the 98.8 he averaged in 2017. Command and control may be another matter, as too many of his 31 pitches have caught too much of the strike zone, causing too much solid contact (91.6 mph average exit velocity and .788 xwOBA). What’s more, batters have swung at just one pitch outside the zone (Rosario’s hit) and whiffed on just two of his pitches. In the grand scheme, it’s too early to panic, but when you’re not retiring batters, there’s really no place to hide.