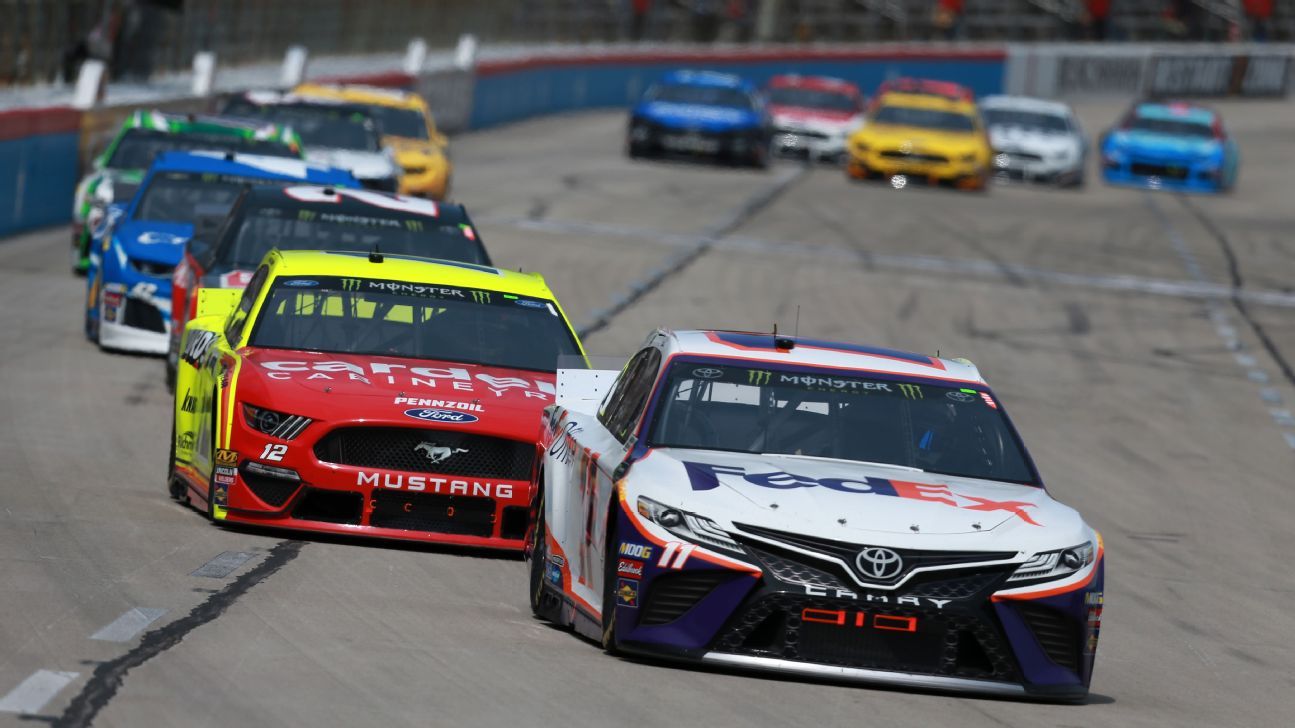 Denny Hamlin at the front of the pack during the O’Reilly Auto Parts 500 at Texas Motor Speedway.

It’s easy to see how NASCAR can get lost amid the shuffle this time of year. You’ve got the NCAA tournament, MLB’s Opening Day, The Masters, NBA/NHL playoff pushes, and even WrestleMania coming up this weekend.

But we just had a race at Texas that featured 26 lead changes, tied for the most we’ve had in a race over the past two seasons and 10 more than we saw in either Texas race last season.

And, the rest of April’s schedule reads like something out of one of my daydreams: Bristol, Richmond and Talladega.

Anyway, before we look too far into the future, let’s take a second to appreciate what happened this weekend at Texas.

Denny Hamlin picked up his 33rd career Cup Series win on Sunday. After a winless 2018, the first winless season since he became a full-time Cup driver in 2006, it’s the second win of the season for Hamlin.

Although he has piled up a significant number of wins, Hamlin is still looking for his first championship, a side effect of driving in the Jimmie Johnson era. His best finish was a second in 2010, the fifth of Johnson’s title seasons.

Those 33 career wins are now tied for the third-most among drivers never to win the championship, along with Fireball Roberts.

Only Junior Johnson (50) and Mark Martin (40) have more wins among drivers never to capture a Cup title.

Kyle Busch a model of consistency

It seems like an upset when Kyle Busch doesn’t win a race. After taking the Truck and Xfinity Series races at Texas, Busch had some pit issues and lost the handle on his car late in the race, but recovered to finish 10th.

That is actually his worst finish in seven races this season. He becomes the first driver to start the season with seven consecutive top-10s since a trio of drivers did so in 2015.

If he can follow it up with another top-10 at Bristol, he’ll become the sixth driver in series to start a season with eight straight top-10 runs, and the first since Terry Labonte in 1992.

However, what none of the five drivers to start a season with eight straight top 10s did was win the title. In fact, the best points finish by those previous five was a third by James Hylton in 1972 and Lee Petty in 1955.

A step in the right direction

Jimmie Johnson started on the pole, led 60 laps and came out of Texas with a top-5 finish. Not an overly impressive day when you’ve won seven championships and more than 80 races, but it was a ray of light for 48 fans.

Let’s start with the pole. Johnson picked up his first pole since July 2016 at New Hampshire, a race in which he led one lap and finished 12th. It’s his first pole at a track longer than a mile since May 2014 at Charlotte.

Johnson has always been stronger at winning races than winning poles. He has won 47 more races than he has poles, the third-biggest differential in series history. The only drivers with more are the other seven-time championship, Richard Petty (77 more wins than poles) and Dale Earnhardt (54 more).

Johnson also led 60 laps, more than he led all of last season. It’s the most laps he has led in a race since leading 81 in April 2017 at Bristol.

Now, how about that top-5 finish. Sure, Johnson’s winless streak is now at 66 races, easily the longest of his Cup career (next longest is 24), but it did snap a 29-race top-5 drought.

The previous longest top-5 drought of Johnson’s career was just 15 races in the 2017 season.